Most homes in Jozi, have their resident Hadeda's. For those further afield...these have to be the most annoying birds known to mankind. They are quiet big birds, that hang around in pairs, and make the most awful noise, timed perfectly to wake you up, or too give you the biggest fright ever. The story goes, that they are in fact deathly afraid of heights, which is why they make that god-awful noise when they take off... :-)

They are very much apart of Jozi...and just like very other house, we have our resident pair, in fact we have two pairs. Towards the end of last year, TF and I noticed a loner Hadeda, who would consistently hang around the back garden. Upon closer inspection, we noticed that he had a bad foot, and would limp around all day. But other than that he seemed in good health....and he quickly became a permanent visitor {much to the disgust of our Phoebe}.

We named him Keith. 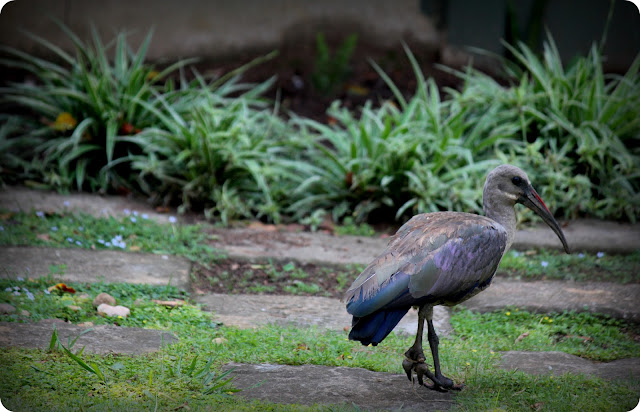 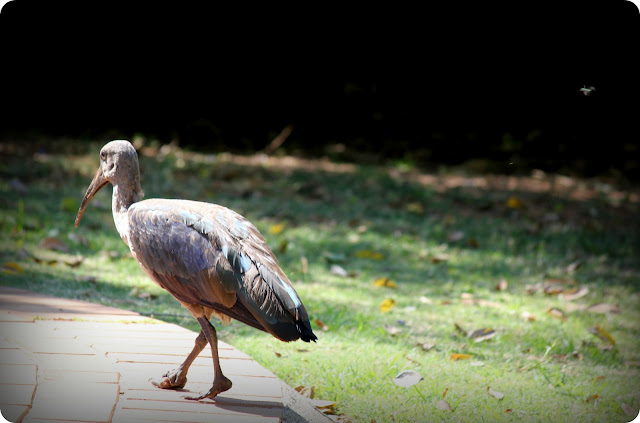 It's been a few months now, and Keith is still around. His foot is still not better, and with Phoebe no longer around, he seems to have found even more solitude in our garden.

A little more than we imagined in fact! When TF arrived home on Tuesday...he found Elvis fast sleep in his usual spot on the patio...and next to him, on the other cushion...you guessed it...Keith! 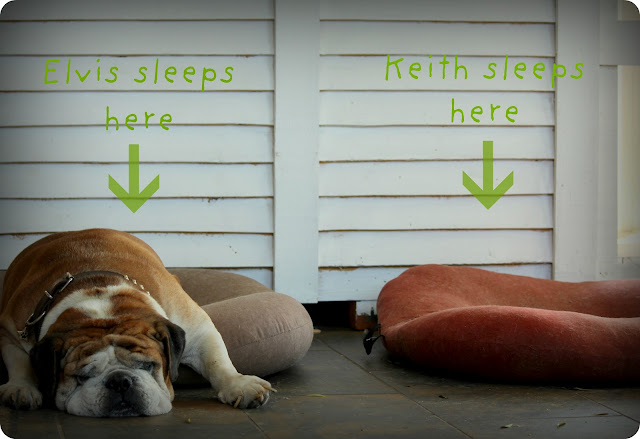 Yes...our big male bulldog has made best friends with the local Hadeda....have you ever?
They seem to have a mutual understanding...Elvis won't try and kill him, and Keith won't annoy Elvis with that stupid noise.

Keith doesn't seem to trust us yet, but we are working on it...we know some one, who can put in a few good words for us ;-)

PS. TF and I argued for about ten minutes over his name...he wanted 'Gus', I wanted 'Keith'. I won.
....we have far too much time on our hands...I think it's time for kids...yes?
Posted by Hayley at 9:30 AM
Catergories: everything else, everything family

That is actually pretty cool!

We have our neighbours black cat that has made friends with our white bunny rabbit. It's quite a site to see them lying next to each other in the morning, I always half expect the cat to pounce on the bunny and try eat him :)

i love reading your posts, so entertaining!

glad u chose keith, gus is more for a seagull.

That is the sweetest story! How AWESOME is your bulldog??? *swoon* ;-)

I love this! I used to have a "pet" duck while I was away at school and they would sleep right outside my window each evening :)

That is VERY cool. And yes, it's time for kids!

What if it's a girl? Then neither Keith nor Gus would work ;-).

Awww how cute!
When I brought my husband home to South Africa for the first time he had a rude introduction to these birds. It's funny how used to the noise you become when you've grown up with them all your life. Everytime they would squalk my husband would jump up. Needless to say, he doesnt miss them.

You do have too much time on your hand Hayls. Def time for a kids ;-)
Preetiks

And secondly - that is so cute. And I love the name Keith for a Hadeda.

I agree with Preetiks ;) x

Gosh, that is adorable! Our labs will never allow it. They hate the hadidas