I forgot to mention.

Guess what we got... 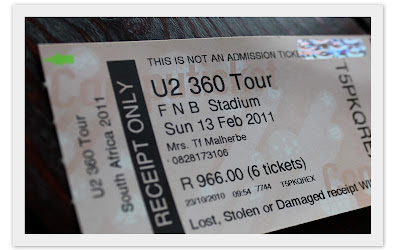 Yip folks those are six tickets to the U2 concert in Feb next year....whoohooo!
When the rumours started coming through that U2 would be coming to South Africa, I wasn't that excited...I mean I am a U2 fan...but not the biggest...and we saw them the last time they were in South Africa. So we had already decided that we wouldn't go.
Ummmm...that was until we saw the pics of their 360 tour...oh my word...have you seen the set...it is incredible! Then we heard it was going to be at Soccer City, which means it will be U2's biggest concert ever! That got me thinking...and then we found that the cheapest tickets start at R161...seriously... R161 to see U2....you have got to be kidding me! Granted we will be high up in the nose-bleed seats,  but we've seen them before, so we don't need to be close up....and that set is so huge, it will still be awesome.
So we joined the queues of people on a Saturday morning to get our hands on some tickets.
I am so glad we did. Cannot wait to see them next year.

Posted by Hayley at 7:00 AM
Catergories: everything else, everything south africa

You guys are going to have SO much fun. In PE we see very few good shows. Will be buying tickets for the Neil Diamond show.

I sooooo wanted to go, we were going to make a weekend of it and go to Cape Town - but oops, realised it was Kaylin's first birthday. Can't miss that - bad mommy!

I saw them last time too and we decided to miss out on this one. Now I am already sorry about that decision.