catching some of the soccer fever.

So as most of you know, soccer is about to take over South Africa in the next year. And it all started off last Sunday with the opening of the Confederations Cup.

Now I am not the greatest soccer fan in the world, but I am very excited that the Confed Cup and the World Cup is coming to South Africa, I think it is awesome.

And Monday night we decided to join in on the fun. My Dad got us tickets to watch a game. We went to catch the world champions, Italy take on the USA.

No guesses as to who the husband and I were supporting. Go the USA! 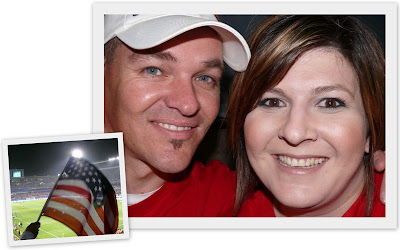 Can I just tell you what an amazing time we had! The atmosphere was incredible, and except for one thing, it was so well organised. I reckon the World Cup is gonna be even better. 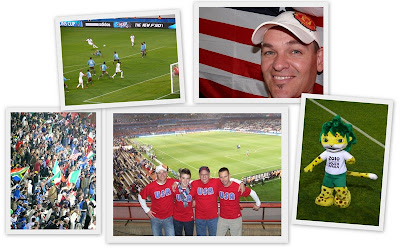 I know it's nearly over, but if you get an opportunity to go, you so must! Now if only our Bafana Bafana, could do as well.

Posted by Hayley at 5:45 PM
Catergories: everything else, everything south africa

I am so jealous. I'm a huge soccer fan but have never been to a game that big... jealous.

It has been great! P and Stacey went to the opening and loved it (they're also not big soccer fans) - was listening to John Robbie this morning - he says he thinks the best soccer supporters in the country come from Bloem!! I didn't watch, but he says the way they sang the National Anthem was awsome! Go Bafana Bafana!!

that looks like so much fun. I need to get tickets for 2010 world cup!

did you use the park and ride facility? it seems that this is the only real glitch.

i am very happy to hear that you had a positive experience!

someone was telling me over the weekend that for the soccer world cup, the media people ALONE number more than ALL the rugby world cup supporters together!

i'm so jealous, hayley!
we have a pro soccer team in houston, and some of the guys are on the u.s. team.
so, all of us are coming to stay with y'all next year, right?
now, please explain, what is bafana?