my love for the stars 'n stripes.

I have mentioned this a few times on my blog, my love for the USA. And a while back I got asked why...mind you I get that question a lot! So, I thought that since it began 10 years ago, I would do a post about it.

For my Dad's 50th birthday, he decided take the four of us (him, my Mom, my Sister and me) to the US for his birthday. Nice huh? Well you would think, but being the ungrateful 23 year old I was, did I moan and groan about the fact that, why on earth would we want to go to America for four weeks, when we could be going to be going to somewhere far more cultured and with a lot more history, like Europe. I mean I could pop into a mall here, what was there to see in America, besides Disney Land (that I was excited about) and yes, seeing NY would be cool, but we have big cities here.

Anyway, I tagged along, thinking it would be fun, but knowing that I was going to be surrounded by Americans that are all loud and think they bigger and better than anyone else...yes, I know, terrible, but that is what I thought. I still have that argument with people today except I am standing up for the Americans now...am I forgiven?

Little did I know that those four weeks were about to become four of the best weeks of my life. We spent those weeks on the east coast....and I fell in love! I can't tell you what it is about America that I love, it's everything, the scenery, the food, the shopping, the people...yes, they are beyond friendly.
It has been my dream to take Francois there, I just knew he would love it. He pretty much had the same feelings about America that I had before I went, but he has been converted too. We had the privilege of tagging along with my folks last year. My Dad ran the NY marathon, so I got to take my husband to the best city in the world and then we spent a few days in Washington DC. 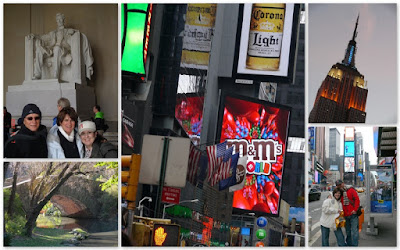 My dream holiday is too take a few months off and do a car trip criss-crossing through all the states...aaaah...one day, at least I have my husband hooked, now it's just the money and the time!

So, while most people I know, love Europe, because of it's history, or the Eastern countries for their beauty and interesting cultures, I am in love with the good 'ol US of A, just because.
And yes it is bigger and better than anywhere else, so they can think that!

Posted by Hayley at 7:35 PM
Catergories: everything me

aww, hayley
we love it here in the us of a, but love hearing your perspective so much too. educating this southern girl about all things african is so meaningful to me. i ask dumb questions and you explain so sweetly.
driving is a great way to see our states, and take time for the small towns. especially here in texas, there are so many fun little places you never know about until you "discover" them.
same goes for our place in maine. please come visit as soon as you can!
ps - we're having a cold snap. feels more like christmas, but no snow here in houston.

i spoke too soon!!! it snowed here this afternoon. no accumulation, but flakes flying around & kids dancing in the street :)
quite a sight for houston.

I have that same defensive argument with people about America. I love it too. The best holiday of my life I was 23, had spent 4 months working in upstate NY on a summer camp teaching horse riding, and then spent 4 weeks driving across country along the northern route, did a bit of Canada, and then down the west coast to LA. Still have a plan to do the southern route too. After getting to LA I flew out to Sydney and stayed with a friend in very horsey country 4 hours west of Sydney in a town called "Orange" - best time of my life!

Please, you havent asked any stupied questions at all!
Thats exactly what I want to do, go to all the little towns.
Better be careful, we might come a and visit and never leave :-)

Oh by the way gammon is ham.

Aaaah Lisa, I am very jealous!

Hey Ness,
Yip, still have that argument. I reckon a few months would not be enough actually, would love to take a year off and just drive!

Please, you havent asked any stupied questions at all!"

There are no STUPIED questions, only STUPIED answers... :)

If you and Francois come to USA again, I hope you two will make your way down to South Carolina!

Oh David, we would not miss it!

Ditto on David's remark . . . come to South Carolina, and we'll lay out a couple of southern feasts for you -- Frogmoor Stew, Shrimp & Grits, Chicken Bog, and maybe some collard greens as well -- all washed down by some Southern Wine (otherwise known as sweet iced tea)!

It's refreshing to hear that there are some folks out there who feel fondly about America. I spent a few weeks in Europe a couple of years ago, and enjoyed myself immensely. However, not many of the people I met had the same viewpoint of America as you and Francois.

Hey - I also went "State side" when i was 23. I worked on a summer camp In New Jersey, just outside NYC. After the camp ended, I hooked up with 4 Aussies, and we toured the entire east coast! Went up state new york 1st, (stunning - Vermont! Aah!) and into Canada (Toronto and Niagara falls) and then we came down and stopped in every state on the east coast! When we hit Florida - we headed west! I got as far as New Orleans, whn my money and holiday time ran out, so I had to fly back to the UK! But - to this day - I am still itching to get back and do the west coast! I'll have to do it as a retired hippy now, as life and family and kids have got in the way! But - I WILL DO IT! XX

Hi Darryl, oh I am so going to be there!